No more hiding 20 feet from stardom: it’s time for Montreal to stop playing back-up singer to more top-of-mind music destinations and take center stage. It can be a surprise to learn how important a role the city has played in popular music over the decades, but its contributions have truly earned it a place in the music history spotlight. Currently, several major acts hail from Montreal, including Arcade Fire, Chromeo, Grimes, and Rufus Wainwright. (Not from Montreal: the band Of Montreal. No one said pop music made sense.) What’s more, in the past, Montreal has nurtured game-changing talent and hosted one of the most iconic moments in the annals of popular music, and the artists most closely associated with the city, past, and present, make excellent tour guides for a visit.

Folk-rock icon Leonard Cohen, best known for the oft-covered “Hallelujah,” is without question Montreal’s favorite musical son, and devoted fans can easily fill a stay with Cohen-themed activities. Fanatics and the uninitiated alike should start with a visit to the Musée d’Art Contemporain, and its current exhibition “Leonard Cohen: A Crack in Everything,” a six-gallery love song to the musician and his legacy. Concert footage, virtual reality, even a recreation of Cohen’s living room complete with a hologram of the man himself, all get visitors primed to follow in his footsteps through the streets of his hometown. You may leave unable to stop humming Cohen’s tunes, but that will only help you blend in with the locals. The exhibition closes April 8, 2018. 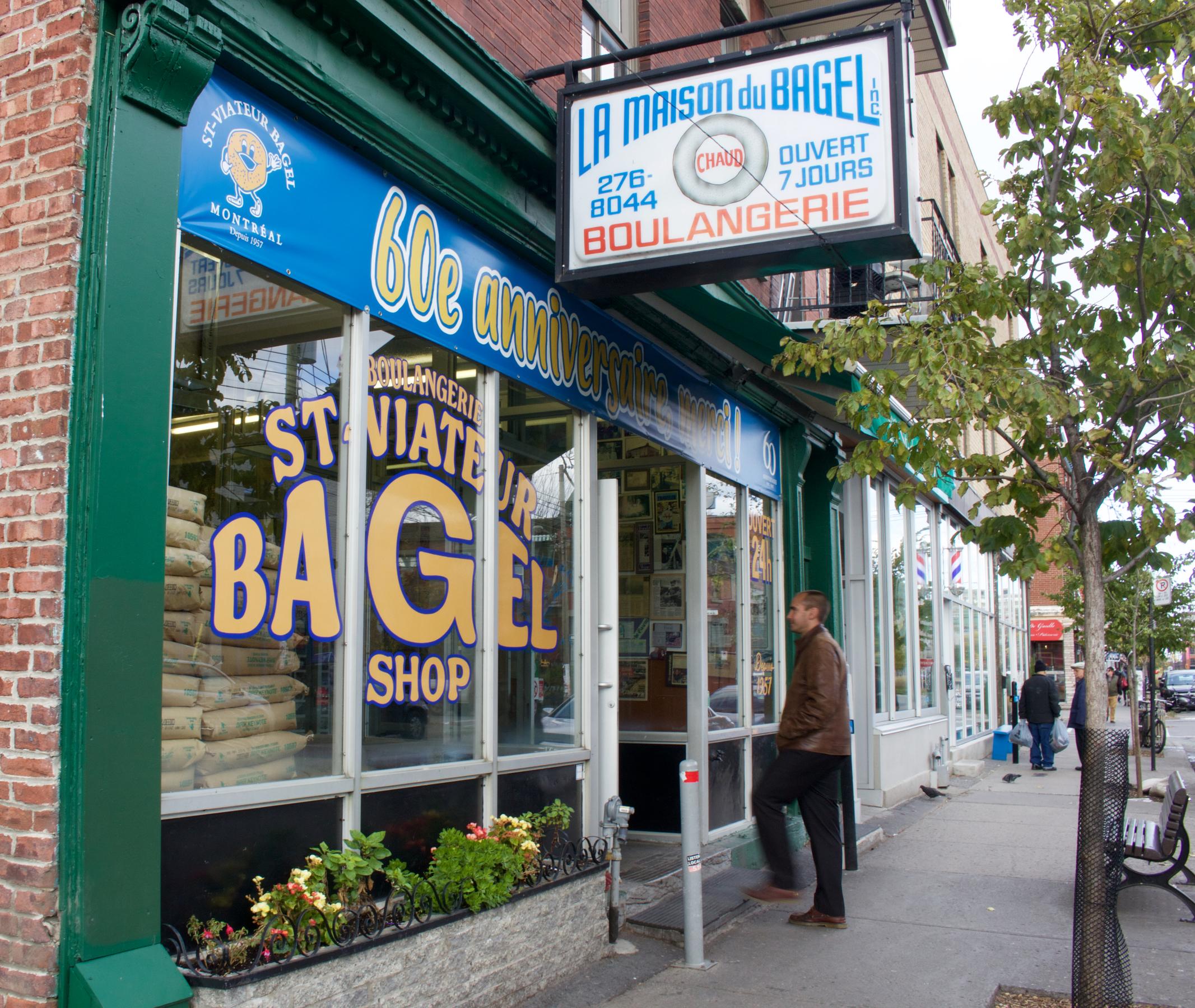 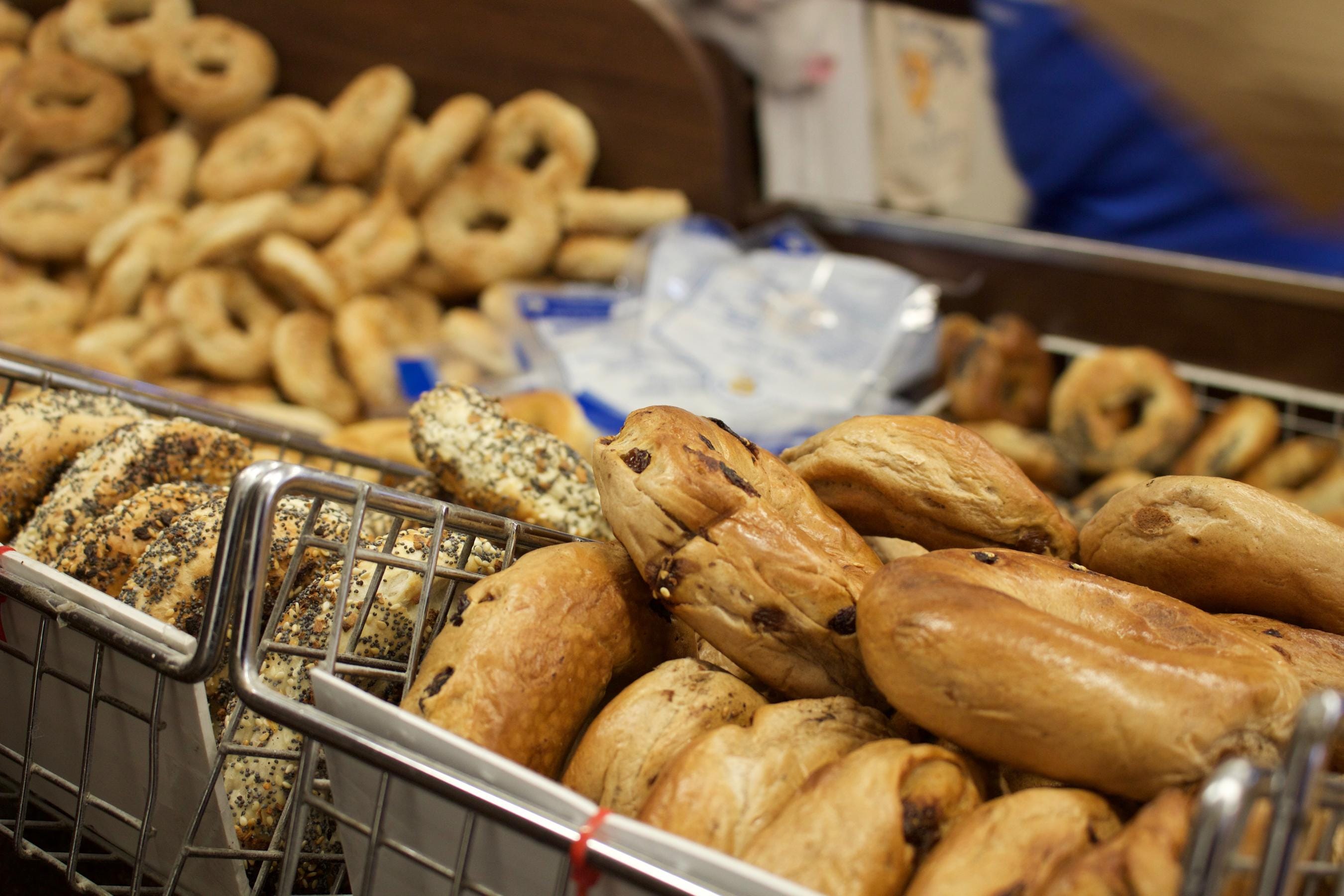 After being uplifted by the man and his works, pay your respects with a tour of important sights in Cohen’s Montreal life, scattered about some of the city’s most interesting neighborhoods. Start off and fuel up at St. Viateur Bagel, a family-run institution in the Mile End, where the owners will gladly dish about Cohen’s generosity while pulling addictive, honey-sweetened bagels from a large, open brick oven along the back wall.

INSIDER TIPThe most popular flavor they sell (by a long shot) is sesame, but Leonard was a poppy seed man.

Over in the Plateau neighborhood, Cohen’s house and foundation headquarters sit side by side on a corner of the diminutive Parc du Portugal, and more than a year after his death in 2016 worshipers continue to place flowers by his front door. Take time to look both up and down: admirers have stenciled the lyrics to “Hallelujah” on the sidewalk along Rue Marie-Anne, and modified the street sign above in a heartbroken nod to another of his most beloved songs, “So Long Marianne.”

INSIDER TIPPlan to arrive at your vantage spot of choice about an hour before sunset to capture the moment when Cohen’s image is spotlit in golden light while the streets around him sink into shadow.

Heading out from the opposite side of the Parc du Portugal, a short walk down Montreal’s epicenter of cool, Boulevard St-Laurent, offers a clear view of one of two monumental portraits of Cohen currently gracing the sides of buildings in the city. Here he glowers down on a parking lot; the best vantage point is on the west side of St-Laurent, half a block south of Napoleon Street. The second Cohen mural, in which the musician wears a more benevolent expression, rises above Downtown on the corner of Sainte-Catherine and Crescent and is best viewed from the Museum of Fine Arts or the scenic overlook at the Chalet du Mont-Royal. This panoramic viewpoint takes in far more than just the mural from atop Frederick Law Olmstead’s bucolic Parc Mont Royal, on the hill that rises like the crown of Cohen’s trademark fedora over the city. 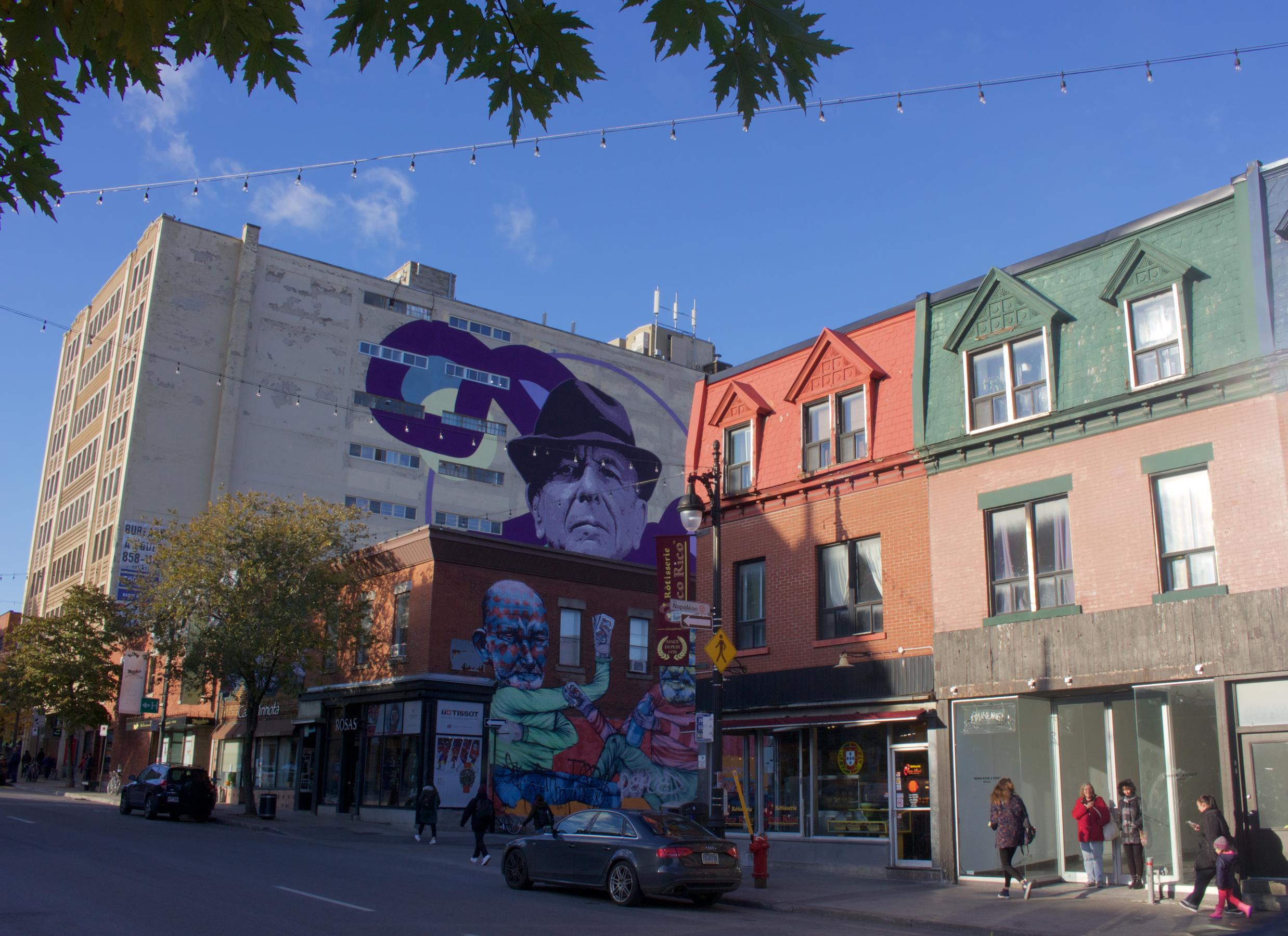 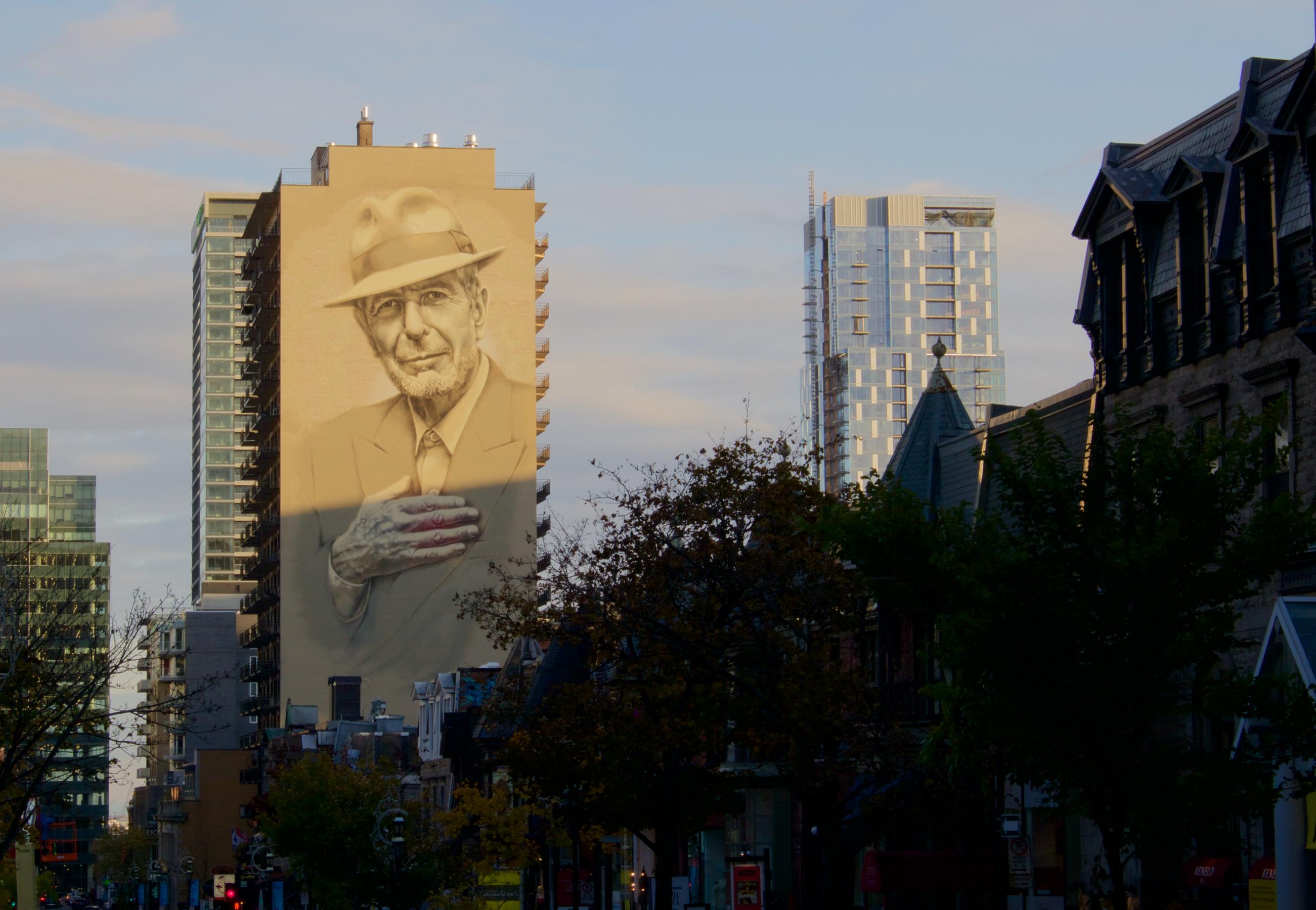 Between the park and the Outremont neighborhood behind it lies the Shaar Hashomayim Congregation Cemetery, where right inside the wrought iron gates Cohen’s brand new headstone welcomes a steady stream of pilgrims ranging from the merely curious to the openly devastated. In keeping with Jewish tradition, many place stones atop the grave markers, but the offerings don’t stop there. On past days the gifts above and below his name have included a bagel, an appropriate tribute for a true son of Montreal, and poems, befitting one of the titans of songwriting. 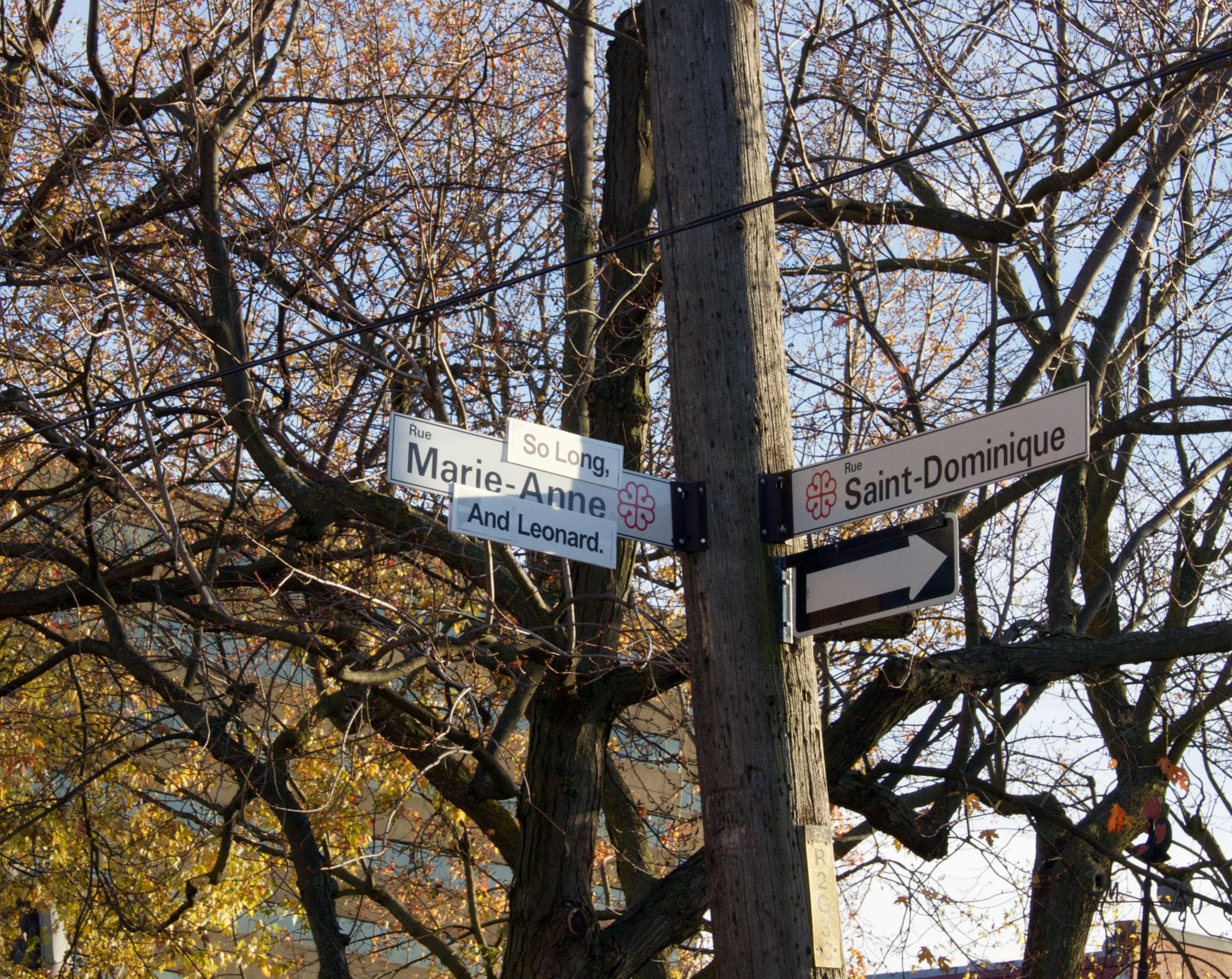 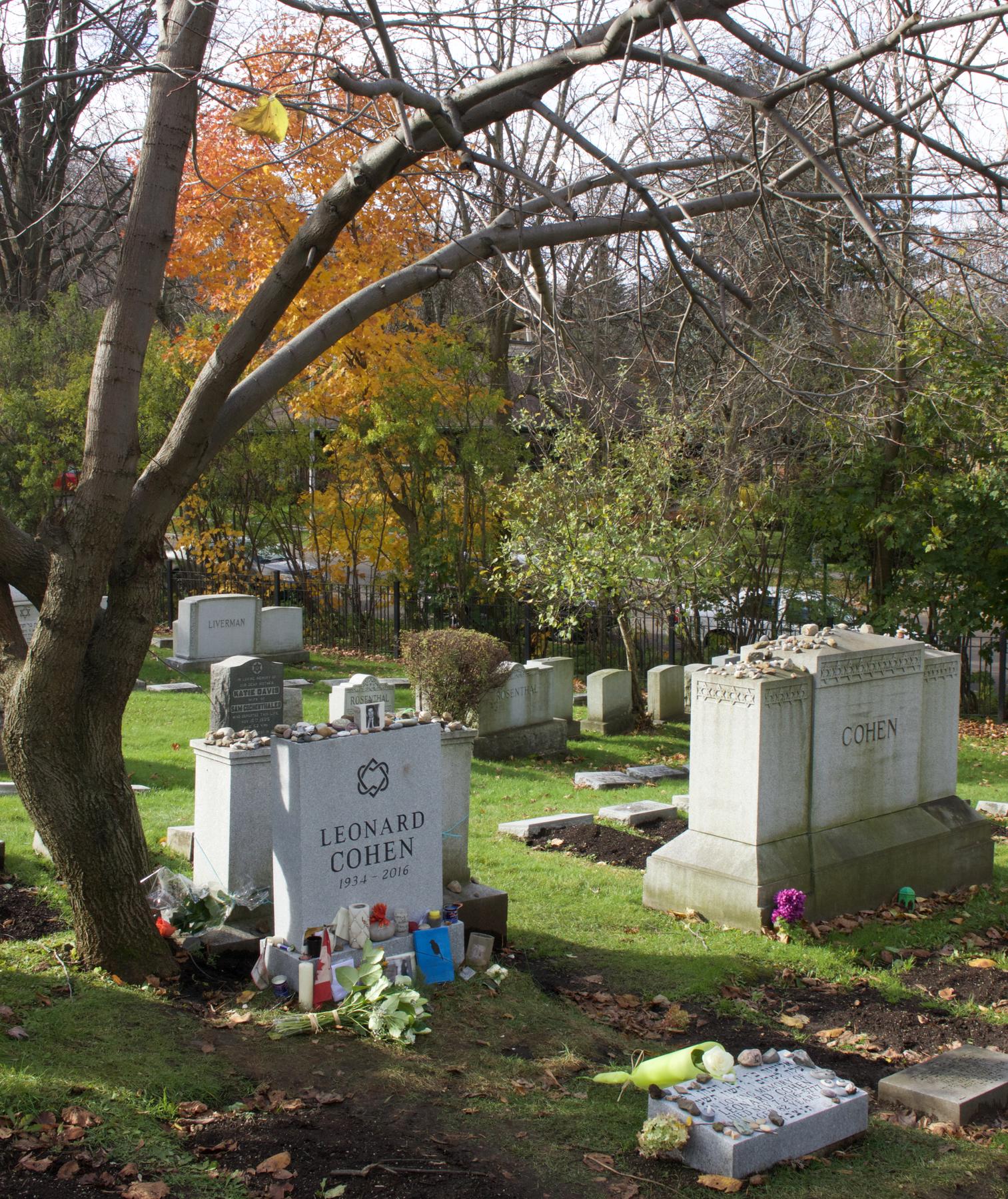 Typically associated with Liverpool and New York City, this rock superstar couple pulled off arguably their most iconic moment in Montreal when they put their honeymoon to work for social justice. In 1969, Lennon and Ono holed up in a group of rooms on the 17th floor of the Fairmont Le Reine Elizabeth Hotel for their second Bed-In For Peace (the first having taken place in Amsterdam—the rich and famous get to take multi-part honeymoons). In those very rooms, Lennon, Ono, and a cast of characters including Timothy Leary recorded the enduringly popular anthem “Give Peace a Chance.” The hallowed ground of Suite 1742 has been redesigned to evoke its moment of glory, with reproductions of the Hair Peace and Bed Peace signs on the windows, Ono-approved memorabilia decorating the walls, and virtual reality headsets that let the wearer experience the Bed-In from the point of view of Lennon and Ono themselves. For a mere $3,000/night, up to four friends, family members, or bandmates can book the actual suite like any other hotel room…except with this one they can breathe in rock and roll history as they sleep. All we are saying is, this could be a lifetime highlight for a Beatles/Plastic Ono Band fan.

If the price isn’t right or the room is already booked, there is still a Montreal Bed In memorial that anyone can see, unless they have limited or impaired mobility. Up either a winding gravel path or a few thigh-scorching levels of a staircase, both of which can be accessed from the Rue Peel entrance at the foot of the Parc Mont-Royal, lies Give Peace a Chance, a subtle public artwork by artist Linda Covit and landscape architect Marie-Claude Séguin, featuring the song title in 40 different languages carved into paving stones set alongside a curve in the path.

INSIDER TIPThe piece can be easy to miss, particularly if you are huffing and puffing with the effort of scaling the slope, and it is not well-marked on most maps.The best way to be sure you find it is to be certain you’re entering at Rue Peel, take the path instead of the stairs, and keep a lookout down and to your right. 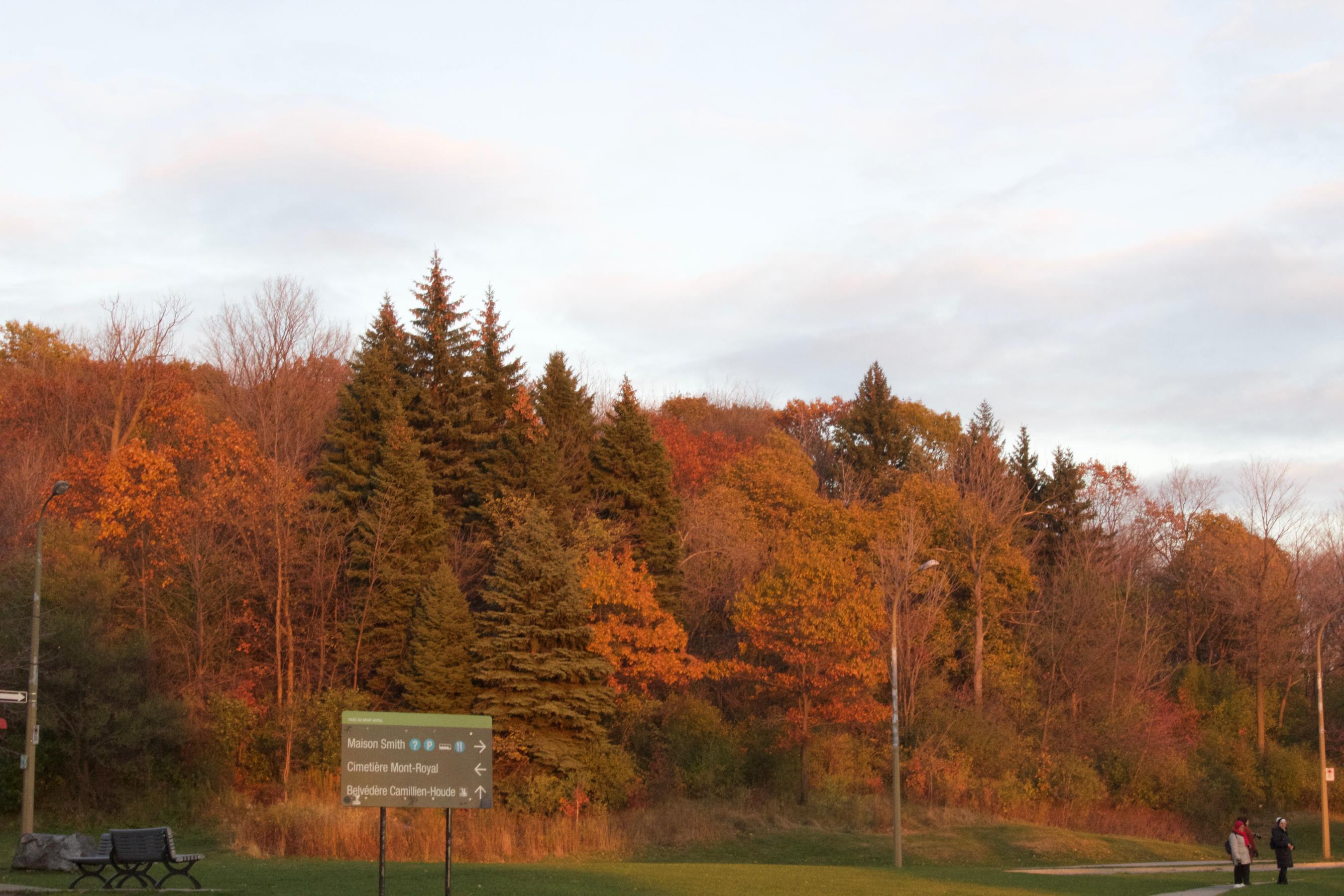 Not all of Montreal’s contributions to music history are resting in peace. The massive success of the exuberant indie rock band Arcade Fire has helped open the world’s eyes to the importance of their hometown, and opened doors for the wave of bands following in their wake—making it all the more disconcerting to walk into cozy neighborhood bar and live music venue Casa del Popolo and imagine the now-7+-member, arena-filling, ensemble crowded onto the tiny stage. Take in a show or two here and you might see the next big headliner before anyone outside of Montreal even knows they exist.

INSIDER TIPTime your trip to coincide with any of Montreal’s many world-renowned music festivals, like Osheaga or Montreal Jazz Fest, and you’ll be able to catch more than just a couple of new-to-you (and well-established) bands. Typically, festivals in the city present a certain percentage of their shows free of charge, one of the many reasons so many young musicians flock there to visit and to live.

Spice up an Arcade Fire-inspired visit to Montreal at Haitian bar and restaurant Agrikol, recently opened by band members Win Butler and Régine Chassagne in the Village neighborhood. Funky tropical decor, an outdoor terrace in the summertime, and punchy rum cocktails combine with the celebrity association to make this a popular spot, so lines for the creole fare can be long.

Technically the pop diva hails from elsewhere in the province of Quebec, but years ago she adopted Montreal as her home and her fellow citizens have embraced her wholeheartedly. Regardless of whether or not her music makes your heart go on, it’s worth taking a peek inside the stunning cathedral where she was married, Basilique Notre-Dame-de-Montréal (Our Lady of Montréal Basilica). 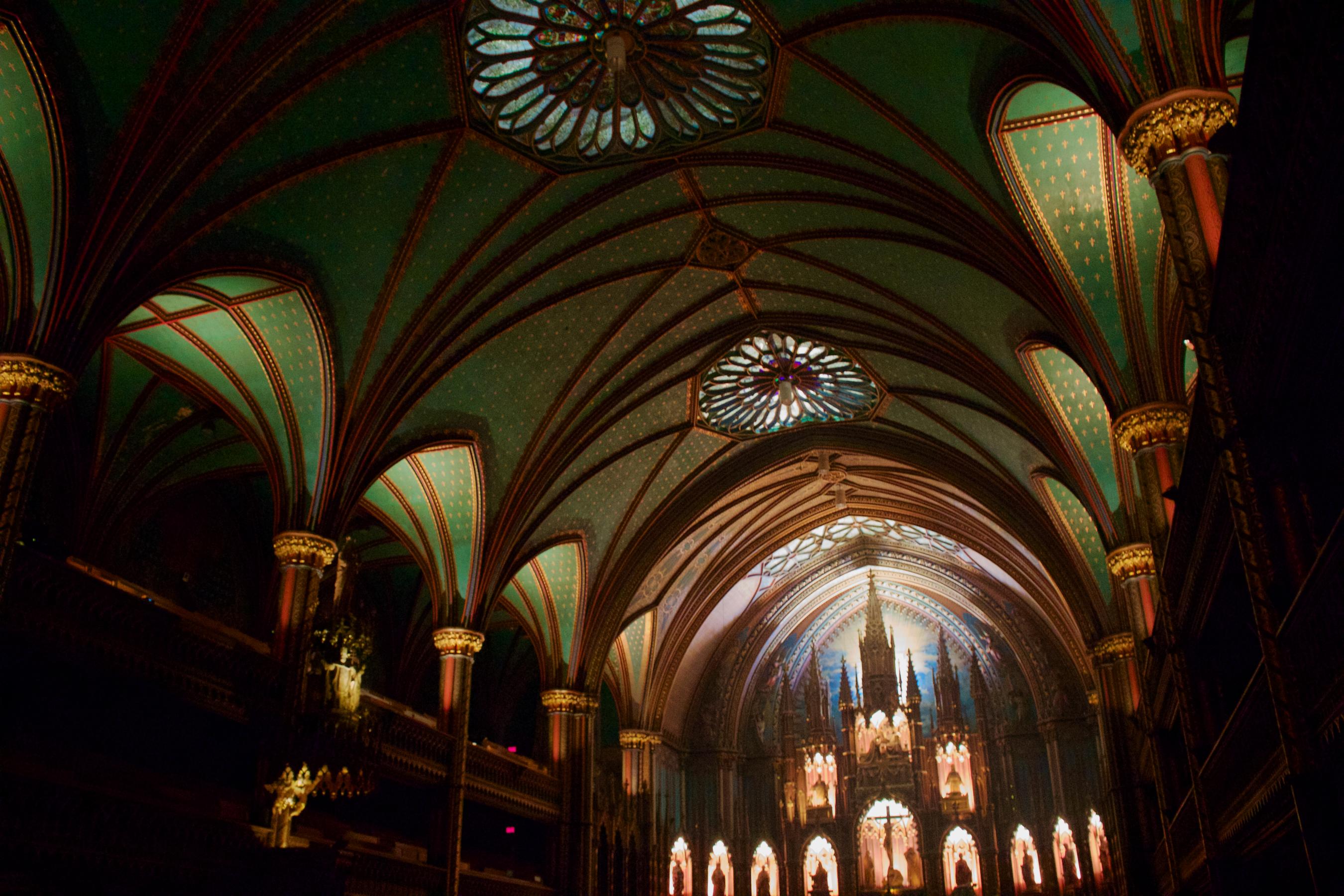 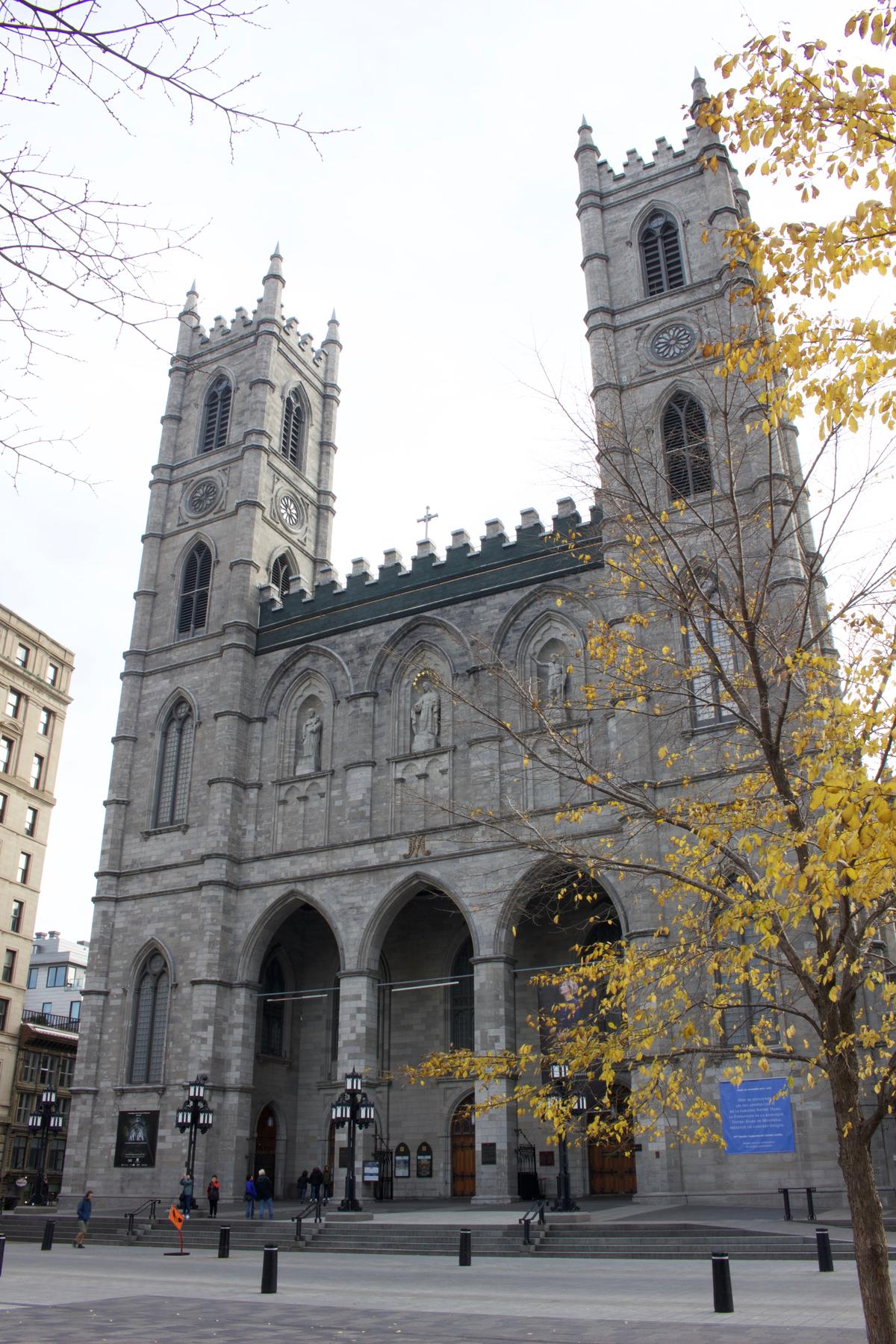 The Gothic Revival interior provides enough spectacle to satisfy a diva in daylight, and a multimedia/sound and light show called Aura ups the ante after dark. (Some might call a sound and light show cheesy, but, as with Ms. Dion’s music, one person’s “cheesy” is another’s “awe-inspiring,” and there’s no denying the technical prowess behind the extravaganza.)

INSIDER TIPThere are no bad seats for Aura and time is allotted before and after the main show to explore the smaller displays along the aisles to the side of the nave, so getting into the (outside, and therefore often freezing) line any more than 10 minutes before showtime is unnecessary.